Who is stealing Nigeria’s oil?

Nigeria’s crude oil production is losing an average of 200,000 barrels per day to theft, according to the state-owned Nigerian National Petroleum Corp., indicating a rise in pipeline sabotage in the West African country. 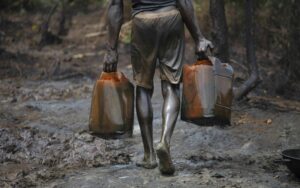 In an interview, Nigerian Upstream Petroleum Regulatory Commission Chief Executive Officer Gbenga Komolafe revealed that thieves illegally access pipelines crisscrossing the Niger Delta region lose up to 150,000 barrels of oil every day. The lost barrels are worth around $4 billion per year at current prices.

President Muhammadu Buhari and the Federal Government may unknowingly be lending weight to charges of government participation in the systematic theft of Nigeria’s oil, the country’s financial backbone.

According to statistics provided during a meeting in Abuja last Thursday between the Nigerian Upstream Petroleum Regulatory Commission (NUPRC) discuss crude oil theft.

“We’re genuinely aiming for three million barrels per day,” Komolafe stated at the NUPRC’s Abuja headquarters. He further added that between January 2021 and February 2022, the entire value loss was roughly $3.27 billion, with an average monthly value loss of $233.99 million and a daily average of $7.72 million.

When converted to naira using the official N416.25 to dollar conversion rate, the sum comes to nearly N1.36 trillion, a development that has led the country’s crude oil production to fall far below OPEC quotas and the baseline set in the 2022 budget.

At a time when it should be building up its foreign reserves, the country is losing billions of dollars. In Nigeria, oil theft has been a persistent and prevalent issue. It thrives on corruption and the weaknesses of governments and institutions; to eradicate it, a well-thought-out strategy and strong political will are required.

In a series of tweets earlier this week, Tony Elumelu, who owns large holdings in Tenoil, expressed his dissatisfaction with the situation, saying: “Businesses are suffering.” How is it possible that we are losing over 95% of our oil production to thieves? Consider the Bonny Terminal, which should receive over 200,000 barrels of crude oil per day but instead receives less than 3,000 barrels, prompting the operator, Shell, to declare force majeure, putting their businesses at risk.

The NNPC spent N32.56 billion on pipeline security and maintenance costs in the first seven months of last year, exceeding the N29.6 billion allocated for the year, owing to an increase in pipeline vandalism and maintenance frequency. Even as they await the newest report from the oil corporation, stakeholders assume the costs must have increased.

“If our security forces can’t stop this, why are we paying taxes?” It is apparent that Nigeria’s inability to achieve its OPEC production quota is due to theft, not a lack of investment!”

Gbenga Komolafe, the Chairman and Chief Executive Officer of the NUPRC, stated that the current level of crude oil theft in the country is now a national threat and organised crime, and that the government is taking serious steps to activate the house community fragment of the Petroleum Industry Act (PIA).