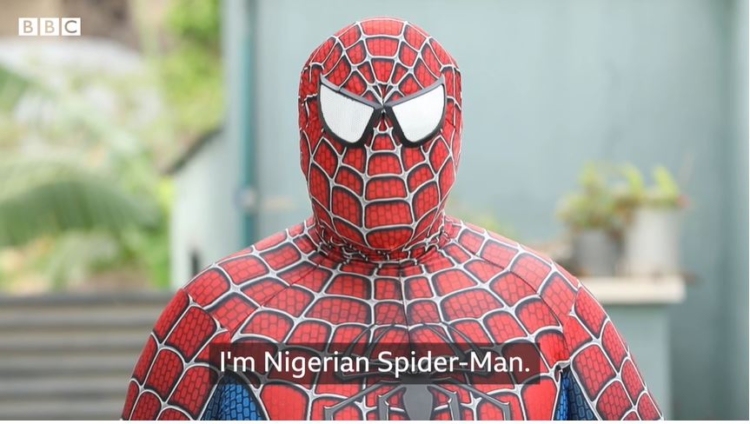 The World Bank reports that waste generation is increasing.

In 2016, cities worldwide generated over 2 billion tonnes of solid waste, equating to 0.74 kilograms per person per day.

Much of this waste ends up on the streets, so Nigerian environmentalist Jonathan Olakunle dresses up as Spider-Man from Marvel Comics to help clean up the streets of Osogbo.

All of them need someone like the Nigerian Spiderman. In Nigeria, Jonathan Olakunle is fighting for a clean society. Every day, he dresses up as the Marvel character Spider-Man and cleans the streets of Nigeria. He aspires to make the world a better and cleaner place.

Why Does the Nigerian Spiderman clean?

Jonathan Says that he gets unhappy whenever he sees waste on the streets. He doesn’t like how people around him keep littering.

We would have just looked at it and walked past it if it were upto us. But that’s not the case with the Nigerian Spiderman. Since he didn’t like the litter, he took it upon himself to clean it.

We have made it a standard way of living, but Jonathan refuses to accept it. He does believe that it was ever supposed to be the normal way of living.

He started an environmental clean-up exercise in 2004. Jonathan says that he always hated the dirty environment. He could not stand to be around dirty floors or litter. It disgusted him. So he always cleans his home. But he believed that our entire country is supposed to be our home, so why don’t we clean it too? This made him start going out in the streets from a very long time back and cleaning up. He did what he does at home but in the streets, and this is how the Nigerian spider man concept started.

Why does he wear a costume?

But now the question is, why does he have to wear a costume if he wants to clean? The reason for it is that he wants to draw attention to himself. And what other better way there is than to wear a superhero costume.

This is quite clever because if he cleaned in his regular clothes, people would have just walked past him and ignored him. But this tactic of his diverts everyone’s eyes toward him.

In the beginning, he did not use to wear a costume people would ignore him. If he were in his regular clothes and went up to people to ask for assistance, people would not participate in his mission. But since he started wearing a costume, not only does he grabs people’s attention on the street but also motivated the people to take part.

He believes that our duty as responsible citizens is to keep our society clean. When African people travel to Europe or America, Jonathan says that they start to abide by the law of cleanliness there. But why do they start doing it again when they come back to Nigeria? He wants the African people to stop believing that they are dirty people.

Jonathan wants to clean the streets to prevent the spread of diseases like malaria, Lassa fever, and cholera.

Every Nigerian should stop dumping their waste on the street or drainage. We should work hard as citizens to make Nigeria a clean country. We should aim to protect our people and land, and the ocean by keeping it clean.