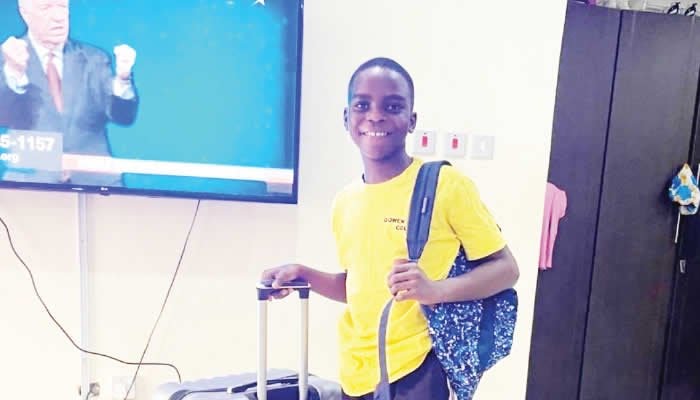 By adminDecember 7, 2021No Comments

Since last week, the hashtag #JusticeForSylvester has been trending on social media, and a WhatsApp group has been launched for the same aim.

Sylvester Oromoni’s family claims that five of his classmates at Dowen College in Lagos tortured him after he refused to join a cult. His death angered many Nigerians, and the institution was forced to shut indefinitely. Dowen College stated the youngster died due to hip injuries he acquired while playing football in a statement. “Preliminary inquiry revealed no fighting, bullying, or any other sort of assault on the youngster,” it stated.

The victim’s cousin presented images and video footage that seemed to support the claim that the youngster had been bullied and abused, resulting in his early death. Furthermore, he claimed on Twitter that five guys approached Sylvester, locked him in his hostel, and gave him a chemical to drink – none of which has been confirmed by the police, who say they are still investigating.

Ebilade Ekerefe, the group’s national spokeswoman, said in a statement that a comprehensive inquiry into what led to the boy’s murder was required to bring the perpetrators to justice.

The police have vowed to look into the circumstances surrounding the boy’s death. Moreover, Dr. Joe Okei-Odumakin, President of Women Arise, has urged the police and court system not to shatter the public’s optimism in the case.

Sylvester’s father says he wants Dowen College to give over the pupils he suspects beating his son while cops continue their investigation.

What even the problem of all, Cult groups are?

Cult organizations originated in Nigerian colleges and are secret organizations. Many of them have a reputation for being aggressive, harassing students, instructors, and anybody else to get their way. They’ve also been suspected of being involved in assassinations.

Initiation ceremonies may be lethal, with entrants commonly beaten and subjected to other harmful activities to cleanse them of any weakness.

Members are guaranteed security, networking possibilities, and financial aid on occasion. Joining a cult is mainly motivated by a desire for power and fame. Anyone invited to participate is expected to see it as a privilege. It might be expensive to decline their offer.

The governor of Lagos state imposed a 21-year prison sentence for cultists earlier this year to prevent individuals from joining these secret groups.

When teachers report children to their parents, most parents rush to defend their children, according to teachers. Parents should broaden their horizons and devote more time to their children’s education.

Meanwhile, after the school’s closure, Dowen College’s Board and Management vowed to assist authorities in investigating the incident’s circumstances.

“We insist that the police, the state government, and the judicial system must all live up and not present the usual disappointment.

“After this, we must raise a concerted effort to ensure that we distinguish between the school and the deadly jungle,” stated Comrade Deji Adeyanju, leader of the Concerned Nigerians Group.