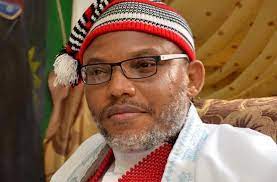 Bruce Fein, who is the lawyer of IPOB’s leader Nnamdi Kanu, has written a letter to Ohanaeze Ndigbo. The latter states that the Nigerian Government plans on imprisoning kanu, without any trial or investigation. The letter was directed to George Obiozor, who is the President General of Ohanaeze Ndigbo. Bruce Fein is a US based Lawyer. He has his own law firm called Bruce Fein Law Firms.

In one part of the letter he has written “It has become obvious beyond a reasonable doubt that the Fulani zealots have no incriminating evidence against him. They aim to imprison Nnamdi Kanu indefinitely without a trial praying for either for his death or handing his fraudulent prosecution to the next administration and wash their hand like Pontius Pilate.”

Another part of the letter read “For nearly a year, Nnamdi Kanu has been punished by indefinite detention in solitary confinement and denied access to needed nutrition, medical care, and counsel of choice in violation of international human rights law and the Nigerian Constitution. (The Fulani government notoriously honors the Constitution in the breach rather than in the observance). Nnamdi Kanu has also been denied his rights to a public, prompt, and fair trial before an impartial judge.”

Fein addressed Ohanaeze, “Face up to your legal and moral responsibilities as professed Biafran leaders. Do not show your heels when danger appears.”

He went on to say “Nnamdi Kanu is one of you – born on the same soil, raised on the same food, buoyed by the same music and dances, and nurtured by the same culture, inspired by the same flag. He has risked that last full measure of devotion (including dodging bullets of would-be assassins) to deliver the Biafran people from the cruel oppressions and genocide of the Fulani-controlled Government of Nigeria like Moses and Pharaoh in the Old Testament.

“You collectively, have a legal and moral duty to speak out publicly against this travesty of justice that daily inflicts great misery on the Biafran people. Do not become traitors to the noble cause. Risk a tiny fraction of what Nnamdi Kanu has risked to regain Biafran sovereignty. It was stolen by the British over a century ago and the Fulani have refused to restore it by resorting to genocide.” He added

Asking Ohanaeze to take a stand He said “Silence is not acceptable. Neutrality between the firefighter and the fire is not an option. You cannot escape the judgment of history. Show you are made of sterner stuff than quislings.”

Fein said that the court was postponing the trial of kanu’s case purposely.

He said “The day before the bail hearing, Justice Nyako announced through the court Registrar that she had become “indisposed” and had adjourned the case another month to June 28, 2022. Couldn’t the Justice concoct a better excuse, like affliction with Covid? “Indisposed” means a mild illness that passes in days. A more likely explanation is that Attorney General Abubakar Malami, acting on the instructions of President Muhammadu Buhari, ordered Nyako to again postpone the proceedings because the prosecution has no case.”