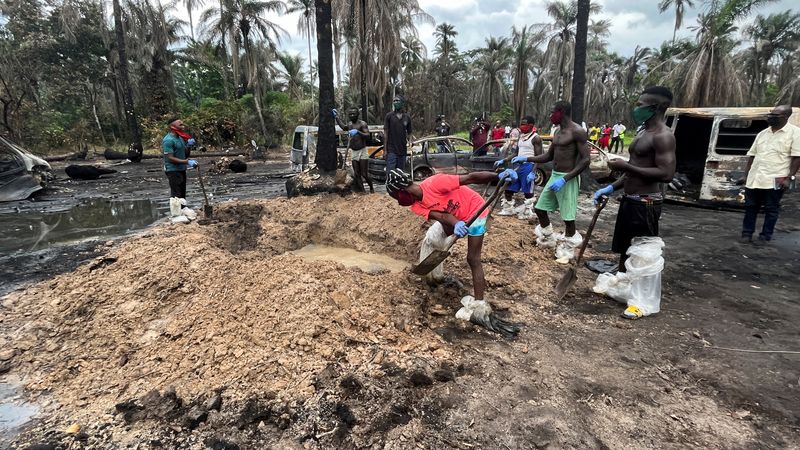 More than one hundred people were killed in the weekend explosion of an illegal oil refinery in Southern Nigeria. Officials say that the victims were buried in 3 mass graves on Tuesday evening.

This blast occurred on Friday. It happened between Rivers and Imo states. It was one of the worst blasts in years in an area where oil theft and illegal refining are enormous. The blast inflicted huge losses and much environmental damage on Africa’s largest crude producer.

The officials buried the blast victims in Abaezi forest in the Abacheke Kpofire community of Ohaji Egbema council in the state.

The chairman of the state claims that they could not identify 50 people from the affected people. Due to this, they had to give them mass burial.

Security personnel and officials from the National Emergency Management Agency were present during the exercise (NEMA). The Journalists and security guards waited for more than six hours for the health official to arrive. The health officials had to disinfect the area after they picked up the bodies from the locations where the fire had caught them.

Mourners attended the funeral of these identified victims. The crowd was mainly of youths, Nigerian Red Cross Society members, people from national emergency management, and some politicians. They joined the funeral to pay respect to these people when they were lower in their graves.

The brutal incident bought pain to everyone. This pain was evident when prince Marcel Amadioha, the Interim Management Committee chairman of the LGA, represented the governor of the state, Hope Uzodima. We could see how much affected he was by his emotional address. He stated that burning these victims was the least they could do as no one came to identify them like the rest of the people there. It was because they were burned beyond recognition. And this was the reason the chairman instructed to conduct a mass burial for these victims.

There was no one for them after the incident. The victims were unidentifiable, and no one could tell who they were to take them home.

He stated that the incident, which took the lives of more than 100 people. This incident would act as a warning to others who are engaged in the illegal deed.

The Imo State Government is stopping all unauthorized refineries in the area. They say that they cannot continue to allow this economic sabotage, which caused hundreds of people their lives and caused a lot of environmental and economic damage. They say they deserve better.

Due to the poor maintenance in Nigeria, pipeline fires are common. But these fires are sometimes also caused by thieves who vandalize lines to siphon off oil. They refine their oil in a makeshift tank and sell it on the black market.

This blast that happened on late Friday was one of the worst in years. The last worst pipe blast in Nigeria before this happened in October 1998. It happened in the southern town of Jesse and killed over 1000 villagers.